Skip to Main Content
It looks like you're using Internet Explorer 11 or older. This website works best with modern browsers such as the latest versions of Chrome, Firefox, Safari, and Edge. If you continue with this browser, you may see unexpected results.

This guide highlights principles and resources used in Evidence Based Practice for both medicine and nursing.

"Unfortunately, there is a large though variable gap between what we know from research and what we do in clinical practice.  Because so much research is published - some valid and some invalid - clinicians understandably are unaware of most of it, or do not have the 'tools' to assess its quality.  Researchers, on the other hand, may not understand the information needs of clinicians and often present their work in a way that is not easily accessible to busy practitioners.  In 1972, British epidemiologist Archie Cochrane highlighted the fact that most treament-related decisions were not based on a systematic review of clinical research.  Rather, they were based on an ad hoc selection of information from the vast and variable quality scientific literature, on expert opinion or, worst of all, on trial and error." 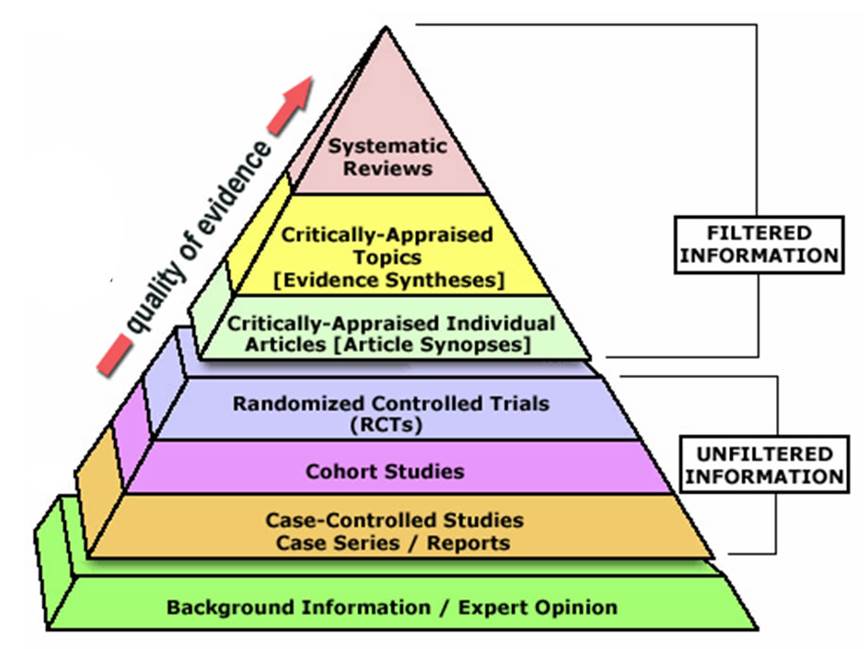 Meta analysis
A quantitative method of combining the results of independent studies and synthesizing summaries and conclusions which may be used to evaluate therapeutic effectiveness.

Critically Appraised Topic
A summary of the current best evidence on a topic, generally by topic experts. Critically appraised topics (CAT's) usually include evidence from more than one study, but are more brief and their methods less rigorous than systematic reviews.

Randomized controlled trial
A clinical trial that involves at least one test treatment and one control treatment, concurrent enrollment and follow up of the test- and control-treated groups, and in which the treatments to be administered are selected by a random process

Cohort study
Study in which subsets of a defined population are identified.

Case control trial
Study which start with the identification of persons with a disease of interest and a control group without the disease. The relationship of an attribute to the disease is examined by comparing diseased and non-diseased persons with regard to the frequency or levels of the attribute in each group.

Clinical trial
Pre-planned studies of the safety, efficacy or optimum dosage schedule of one or more diagnostic, therapeutic or prophylactic drugs, devices or techniques, selected according to predetermined criteria of eligibility and observed for predefined evidence of favorable and unfavorable effects.

1) "Sigma Theta Tau defines EBN as an integration of the best evidence available, nursing expertise, and the values and preferences of the individuals, families, and communities who are served.  This assumes that optimal nursing care is provided when nurses and health care decision-makers have access to a synthesis of the latest research, with a consensus of expert opinion. They are thus able to exercise their judgement as they plan and provide care that takes into account cultural and personal values and preferences (Sigma Theta Tau International 2003)."

2) "The systematic interconnecting of scientifically generated evidence with the tacit knowledge of the expert practitioner to achieve a change in a particular practice for the benefit of a well defined client/patient group."

3) "EBN could be defined as ‘an ongoing process by which evidence, nursing theory and the practitioners’ clinical expertise are critically evaluated and considered, in conjunction with patient involvement, to provide delivery of optimum nursing care for the individual.’ This proposed definition of EBN indicates the use of evidence, theory and expertise in making decisions about optimum care for and with the individual patient."

4) “Evidence-based nursing is a process by which nurses make clinical decisions using the best available research evidence, their clinical expertise and patient preferences, in the context of available resources."